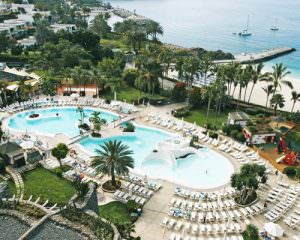 We stayed in a one bedroom apartment at the Anfi’ Beach Club as guests of a relative.

Our room was for two adults and two children who slept on a sofa bed in the living room area which was quite spacious and had sliding doors that opened the full width of the room onto the balcony area. The bedroom was adequate in size and also had sliding doors onto the patio area. The apartment needing updating as the bathroom (although spacious) required new floor & wall tiles (in my opinion).

The shower cubicle was big enough but the doors leaked onto the bathroom floor which was a hazard.

On arrival, we were greeted well by the night time staff & they explained things well. However, it appeared the room was made up for two adults as there was no sheets for the sofa bed which I had to request by attending the reception.

Arriving after midnight with a 13 & 10 year old, I would have expected the sofa bed all made up. However, I had to set it up myself & make the bed. We did not tip the cleaner, because she seemed annoyed/ rude when my wife was still in the rooms, worktops were not always cleaned & she put dirty cups, plates, etc in the dishwasher which had clean stuff in it!!!.

Although the apartment was self-catering, they only had an electric hob & microwave, but no oven which tells me they expect you to eat in the restaurants on site. The room also had a washer/dryer, kettle, coffee machine and all the cutlery & plates, etc. The swimming pool at the beach club was nice but as with most places, sun beds were hard to find after 10.30.am.

Although they had a policy of not being allowed to put towels on them to save for later, they did not enforce this which is a shame. Cooked breakfast (self service) was nice with lots of variety at a cost of 10 Euros per adult & 5 for children (all you can eat).

There was a 5 year old & two 17 month old babies that were not charged. Outside the complex & along the beachfront was some varied restaurants.

I can recommend the ‘Tapas’ restaurant which also does an English style food. We ate there most nights at my bill averaged 75 Euros for two adults & two children.

We tried the Italian next door to the left of the Tapas but the staff were not as friendly & the service was poor. Also, my eldest Granddaughter had a bad tummy after & threw her food up during the night.

We stayed for one week, did not venture out due to our group having small babies.

However, a taxi to the nearby town is only 4.5 Euros & I was told there is plenty of restaurants & shops, etc along the seafront. There is a small Spar shop at reception & a big Spar supermarket along the beach front opposite the white bridge that crosses to a small island.

I would criticise the Anfi Beach Club staff for not being friendly with very few smiling faces. The pool attendants were vigilant at all times which was good as the pool area is divided into three section for Babies, children & adults.

Our team here at Mercantile Claims are always on hand to help you with any issues, concerns or questions you have regarding your timeshare contract. Below are Anfi Beach Club Owners and Guests Comments. If you have a more specific question please contact our team of experts and we will respond with an answer as soon as possible.

It was a wonderful, unforgettable vacation in Anfi Beach Club, high-class club and I recommend this club to everybody to visit.

The Anfi beach club part of the complex is very family orientated. The gardens that surround this are simply stunning and almost manicured to perfection. The rooms all appear to be extremely well presented and even those on the bottom floor have a stunning but secluded view of the gardens with an even bigger terrace area. The club is facing the spotless beach and is difficult to find fault. It is also well guarded and I have never heard of any security issues across the entire complex even though we have been coming for many years.

We visited Anfi Beach club earlier this month and it left us speechless!

Convenient as they provided prompt airport transfer service there and back, friendly reception staff, fully kitted out apartment along with daily cleaning service and right at the doorstep was the beach, boutique shops, children’s entertainment, shopping centre, mini supermarket, restaurants and water sports station! We honestly couldn’t fault this place it was truly an enjoyable experience and trip! If you’re looking for something effortless and just wanting to relax and enjoy the weather. Anfi is the place!

A touch of paradise spoilt by lack of attention to detail.

We have been owners for 15 years. Other resorts have moved on but Anfi Beach club has not. The pool beds are very uncomfortable and despite raising this regularly nothing is done. Other resorts in Gran Canaria have responded, better beds and much thicker cushions. The welcome pack is laughable, two bottles of water and two tiny bottles of shampoo. The week before we stayed in a hotel in Mogán, which has just as good pool facilities, a superb animations team and the welcome and toiletries pack was excellent and we paid less than our one-week maintenance fee!

Our cleaner was fantastic, the reception staff excellent and staff generally friendly but little things matter and the bigger things like the 1 star pool beds are letting Anfi down.

We have taken timeshare holiday resorts for the past 30 years in many different countries but Anfi Beach Club was most definitely one of the very best we’ve ever stayed. Our very spacious one-bed apartment was immaculate with quality furniture & fittings – the gardens & pool areas were always well maintained. The Tropicana Bar on site was a pleasure to use producing excellent food & beverages with friendly serving staff. A LOVELY place to stay for a MEMORABLE holiday.

A perfect setting for a perfect holiday.

Anfi Beach Club is just the most perfect resort for a quiet relaxing break. The grounds are beautiful. There is a lovely beach on your doorstep if you want it, lots of restaurants to choose from and easy access to other resorts by sea or road. The apartments are of the highest quality and very spacious with excellent views either of the sea or the gardens. Just loved it there.

Absolutely loved it at the Anfi Beach Club. Can’t wait to go back again. The apartment was spotless and very comfortable. The balcony was very large, furnished with 2 beautiful sunloungers and a table and 4 chairs. All the rooms were large and beautifully furnished. The resort was stunning, and there were so many restaurants that we had our meals somewhere different every day. The fabulous beach was just outside the gate to the Beach Club. A perfect place for couples or families. Pure luxury.